With Stream UDFs (also called aggregations) in Aerospike, you can perform a sequence of operations on a set of records.

Before starting to write Stream UDFs, be familiar with the following concepts.

Stream UDFs have the following types of operations. You have to write one or more of these functions depending on your application's requirements.

If an attempt is made to update a record by any function from Aerospike lua module in the stream definition, the function will fail. A stream UDF is like the pipe mechanism in Linux where the output of one command can be fed into the next command in a chain, as in the example below:

It is legal to specify multiple functions of any type in any order as long as they can work together. For example, the example below is a legal stream. 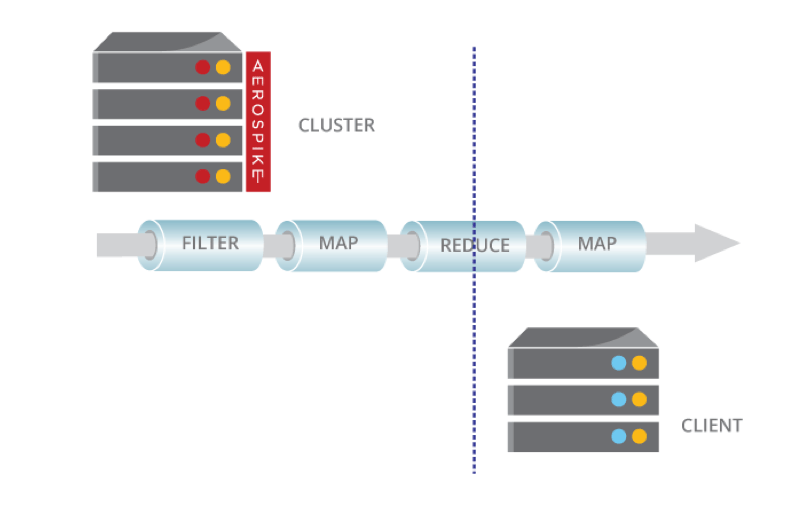 The UDF file should be present both on the cluster nodes as well as the client nodes as the final phase of reduction happens on the client side.

Although the presentation of Stream UDFs often includes the standard filter() | map() | reduce() arrangement, in fact any combination of these functions can be used.

The filter function accepts the current value from the stream and should return true or false, where true indicates the value should continue down the stream.

A typical map function looks as below:

A typical aggregate function looks as below. In the example, it is trying to do a group-by kind of operation where it is trying to find the number of citizens in each city. You will notice reduce is called after aggregate, which will perform a final reduction on the data

The accumulated aggregate value can grow quite large. It is possible, for example, to simulate the SQL Select DISTINCT function by accumulating values in a map and then dumping the map at the end.

The data that is fed to the first function in the stream will be of type 'record'. It should be capable of consuming it. To see how to consume a 'record' refer to the UDF guide.

More on the data types of functions in section below.

The examples above uses hard-coded values for filtering and transformation. It will not be practical to write a whole lot of filter/map/reduce function for each specific use case, for example, one filter function for age > 18 and one more for age > 25. One will want to write a generic function and use it in different ways by passing arguments to it. To pass arguments to these filter/map/reduce type of functions we should use the concept of a closure. In short, closure is a function which will capture the environment in which it is created.

The arguments can be passed when invoking the stream UDF as detailed in the UDF guide.

A Stream UDF should have one or more arguments.

The first argument must always be a Lua: stream_ops Module, which defines the operations to be invoked on the data in a stream.

Each subsequent argument is defined by the UDF and must be one of the types supported by the database: integer, string, list and map.

The return value must be the Lua: stream_ops Module, optionally augmented with operations.