Check out the Aerospike Technical Documentation site. A new look and feel with the same great content and more!

For an interactive Jupyter notebook experience: Launch in Binder​

This notebook is the first in the series of notebooks that show how Aerospike can be used as a feature store.

This notebook requires the Aerospike Database and Spark running locally with Aerospike Spark Connector. To create a Docker container that satisfies the requirements and holds a copy of Aerospike notebooks, visit the Aerospike Notebooks Repo. 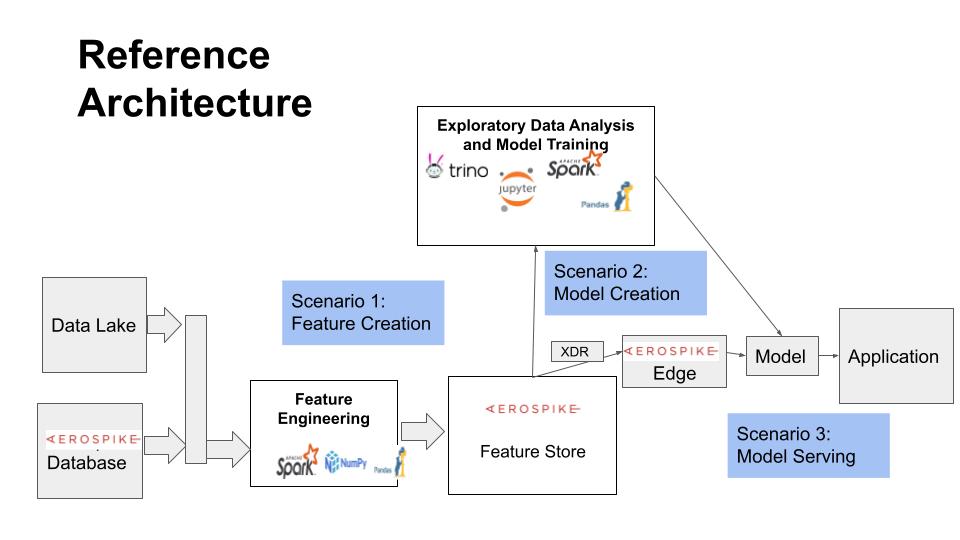 This notebook is organized in two parts:

This tutorial assumes familiarity with the following topics:

This notebook requires that Aerospike datbase is running.

We will be using Spark functionality in this notebook.

Please visit Configuring Aerospike Connect for Spark for more information about the properties used on this page.

You may execute shell commands including Aerospike tools like aql and asadm in the terminal tab throughout this tutorial. Open a terminal tab by selecting File->Open from the notebook menu, and then New->Terminal.

Aerospike can be used as a Feature Store in cases where broader capabilities of a commercial Feature Store are not warranted. Instead, when it is critical to have:

An Online Feature Store provides access to features in real time, and as such requires speed and, for many deployments, scalability. The Online Store only stores the latest version of feature values.

Aerospike is purpose built for the performance and scale requirements of an Online Store.

An Offline Store requires historic data to be maintained for “time travel” use cases, that is, to create datasets at a particular point in time for training and other needs. A time series of feature values can be maintained in Aerospike as a map (timestamp->value) for each feature. Aerospike's native APIs allow efficient implementation of an Offline Store.

An essential requirement for a Feature Store is to maintain Online-Offline consistency to ensure that the models that were trained with the Offline (historic) data remain valid in the production (Online) environment. Typically this means convenient, efficient, and timely sync of data from Offline to Online Store. Sometimes a reverse sync from Online to Offline Store may be requred if only the Online Store may be updated.

Synchronization in either direction between Online and Offline Stores can be achieved through various streaming connectors that Aerospike provides (such as for Kafka and Pulsar).

What is also necessary is to be able to access a specific version “as of time” (a special case being the latest version) for various use cases using the appropriate client library or connector.

Our focus in this Feature Store series will be primarily on the Online Store.

The key design criteria for a Feature Store with Aerospike are access and storage efficiency. (The other key criterion, Offline - Online synchronization, will not be discussed further here. For our purpose here, we assume that can be handled with appropriate change notification and update setup between Offline and Online Stores.)

We will assume the following object model which is typical in a Feature Store:

There are multiple ways to store the latest Feature Values, each with its trade-offs. Here are two possible options:

The design requires multiple versions of Feature Values to be stored, each with its timestamp. One way of modeling such a time series of feature values in Aerospike is to store each feature as a map timestamp->value.

With historic versions stored in it, the Offline Store has to account for the data size problem: both in terms of individual record size as well as overall database size.

Before we dive into the implementation, here are some relevant performance and scalability aspects in use of the Spark Connector.

Random access using the primary key must use the __key bin for direct access through the primary index. Many times the unique user key is duplicated for convenience in another bin, but the equality predicate using another bin will result in a scan. This is shown below in single object load methods.

A set index should be enabled on a set for faster scans over the set. Data exploration as well as dataset creation operations will benefit by not having to scan the entire namespace instead of a fraction of records in a set, resulting in significant speedup as the namespace can be very large as compared to, say, the metadata sets. In the following implementation, we enable set indexes on all sets.

To minimize the amount of data retrieved from the database, query predicates must be "pushed down", or in other words, processed in the database and not on Spark. We will illustrate how expression pushdown is implemented with examples in the Model Training notebook.

Several tuning parameters such as partition factor and compression are available for optimizing perfomrance with the Spark Connector. The implementation here does not make use of them, but you are encouraged to explire them elsewhere.

Use of secondary indexes​

While Aerospike provides secondary indexes, the Spark Connector currently does not leverage them. This performance enhancement is planned in the future.

To make it concrete, let us define and implement a simple Feature Store.

The main objects in a Feature Store as discussed above are Feature Group, Feature, Entiry, and Dataset. These are explained below.

Machine Learning features are grouped by the source of data and processing pipeline. A Feature Group includes many features, and has the following attributes that are useful during feature exploration:

A feature group is stored in the set "fg-metadata".

A Feature consists of the following attributes:

A feature is stored in the set "feature-metadata".

A Dataset is a subset of features and entities selected to train an ML model. A Dataset object holds the selected features and entity instance definitions. The actual copy of entities is stored outside the feature store (for instance, in a file system). A dataset record has the following attributes.

Datasets are stored in the set "dataset-metadata".

The following operations are implemented for the different use scenarios:

The following code is a simple implementation of the above operations. These operations will be illustrated in this and follow-up notebooks.

Let us now see how the feature store objects and operations can be leveraged through the various phases of the ML flow. In this notebook, the focus is on Feature Engineering. Future notebooks will look into Model Training and Model Serving scenarios.

The demo data is abridged from its original version from here. It represents real transactions by European cardholders in 2013. The original dataset has close to 300K transactions, whereas the abdridged version used here contains about a thousand records.

We will illustrate use of the feature store for Feature Engineering through the following sequence:

Read and examine the columns and rows.

Here is how the data looks:

We will perform some simple data transformations:

Create a Spark dataframe to save data to Aerospike efficiently through the Aerospike Spark Connector.

Add an identifier column TxnId. Generate and assign a unique value to it.

Save Features to Feature Store​

We are ready to save the features in the Spark dataframe to Aerospike.

Of the following three steps, the first two steps are needed only the first time when the feature group and features are created. Subsequent updates will use only the third step.

Let's issue a query against the saved features to get fraudulent transactions with amount greater than $2000. There appears to be only one such transaction in the demo data.

Examine the data through aql with the following command:

Let's look at another example of feature store use for data engineering, which is taken from another Aerospike Spark notebook.

We will illustrate use of the feature store for Feature Engineering through the following sequence: 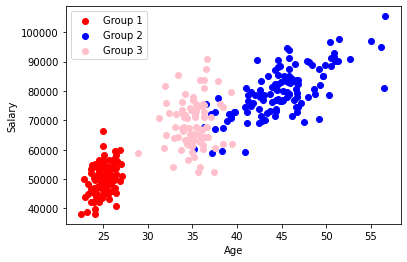 Save Features to Feature Store​

Issue a query against the saved features to get a dataframe with records in age group 25 to 30. There are 50 such users in the dataset.

Examine the data through aql with the following command:

In this notebook, we explored how Aerospike can be used as a Feature Store for ML applications. Specifically, we showed how features engineered using the Spark platform can be efficiently stored in Aerospike feature store via the Aerospike Spark Connector. We implemented a simple example feature store interface that leverages the Aerospike Spark connector capabilities for this purpose. We used the API to save and query features created in two data engineering examples.

This is a first in the series of notebooks on how Aerospike can be used as a feature store. Subseequent notebooks in this series will explore use of Aerospike Feature Store for Model Training and Model Serving.

Close the spark session, and remove the tutorial data by executing the cell below.

Here are some links for further exploration.